NEWMAN CATHOLIC SOCIETY
Being one of the first student clubs formed on campus, the Newman Society has its fair share of stories to tell.
​Below are some snippets from our rich history.
​ 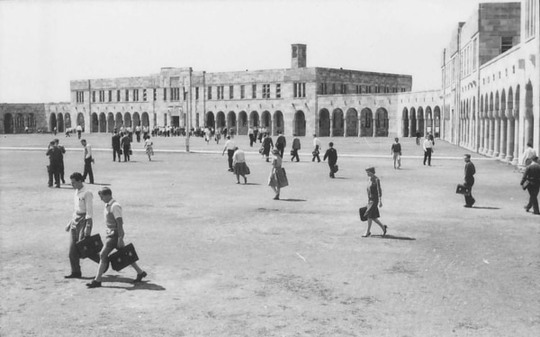 Catholic student societies, in one form or another, existed on campus since the earliest days of the University in the 1920's. Mirroring Catholic movements elsewhere, the official Newman Society was established in 1931 to cater for the religious and social well-being of Catholic undergraduates at the University of Queensland. It was particularly affiliated with St Leo's College, and we owe a great deal to the early students and clergy of St Leo's for their role in our formation.
​
To quote the college rector of the time, Msgr J. English, the Newman Society was formed to:  ​

Under the direction of vice-rector Fr B. Buxton SJ​, who "did really all the work" according to the rector Fr T. Johnston SJ, the Society flourished and enjoyed a rich social and liturgical life, solid intellectual formation, and a large membership throughout the 1950's and early 1960's.

It took a leading role in the Archdiocesan Corpus Christi procession, hosted weekly theology lectures,  organised Academic Masses at the Cathedral, ran retreats and holiday-camps and dances, and hosted the annual Newman Ball. The 1950's also saw a Mission the University, in which public lectures, devotions, and Catholic literature were seen throughout campus. The annual Freshers' Camp often pulled crowds of over 100 students. Many past members recall the great sense of community experienced in those days of growth.
​

Changing administrative procedures at St Leo's College also saw the appointment of vice-rector Fr P. O'Sullivan SJ as the recognised full-time Catholic chaplain to the University. This allayed the dissatisfaction, which had been felt since the mid-1950's, of the energies put into St Leo's College compared to those invested in  other Catholic undergradutes. In actual fact, the rector, Fr B. Fleming SJ​,  was chaplain de jure in ecclesiastical terms, but the vice-rector, with lesser responsibilities at the college, did the bulk of the work with the Newman Society and University chaplaincy.

​The 1960’s and 1970’s also proved to be a time of the radicalisation of the Society’s intellectual and cultural life, as students allied themselves with popular protest movements, and as post-Conciliar reforms affected the life of the faith. Ideals of social justice dominated Society activity in the 1960’s and 1970’s, as members shifted their focus from the formal practice of the faith towards Liberation Theology. Newman Society publications, once filled with articles on liturgy, social events, and book reviews, were increasingly occupied with protest articles and calls-to-action. Needless to say, relationships with the Archdiocese became sour during this period of student revolt. (The first hymn in the Newman Society's Student Song Book was The Red Flag)! One chaplain at this time was Fr G. Dening SJ, who later left the priesthood and became a well-known historian.

After a period of decline (and ecumenical chaplaincy)​ in the 1980's, the Newman Society was actually disbanded in 1989. Those examining literature of this period will also notice various changes in nomenclature: Newman Society, Catholic Newman Society, Newman Association, Catholic Community, &c.

​This period also saw the final separation of University chaplaincy, and consequently the Newman Society, from the life of St Leo's College. This is a hazy period; Catholic undergraduates of the time are encouraged to make contact with us. 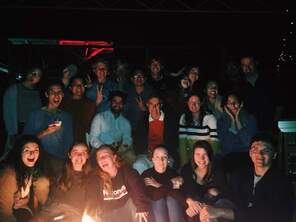 The Catholic Community, which replaced the Newman Society in the 1980's and 1990's, is now itself a memory.
​Despite hardships, including a significant and widely-reported run-in with the Student Union in 2008 regarding our pro-life stance, and despite a small membership base, the Newman Catholic Society continues—to quote our Constitutions—to contribute to the spiritual, intellectual, cultural, and social lives of Catholic undergraduates at the University of Queensland.

We have a rich heritage to draw from, to emulate, and to build upon: this is what we want to do now, and into the future.

From 2015-2019, the University Chaplaincy was blessed to be coordinated by a priest-NET Ministries team collaboration. This lead to the resurgance of the Newman Society in 2018. An impromtu meeting was called to talk about revival which happend to fall on feast of Cardinal Newman. Now, two-years into a lively revival, the society is continuing to grow. The ball was brought back in 2019 held on the eve on St. Newman's canonisation.